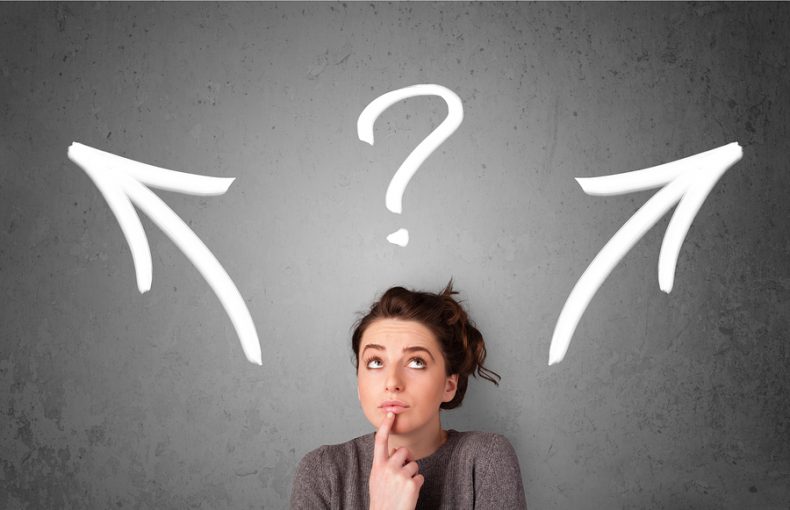 The Ladder of Inference

In today’s world, there never seems to be enough time. Not only do people want things done right, they also want them done ‘yesterday’. As an owner or manager, you probably don’t have as much time as you would like to make important decisions for your business.

Often, you may find yourself in a bind – needing to act quickly to please others, or taking time to make the right decisions with your group whilst others are forced to wait. If you find that you and your team are:

Frequently ‘jumping to conclusions’ during the decision making process, the Ladder of Inference is a tool that may be able to help.

The idea behind the Ladder of Inference is to those making decisions to avoid forming poor judgments based on past experiences, biases, or other factors. The aim is to set aside as much personal influence as possible in order to make choices that are simply in the best interest of the organization as a whole. 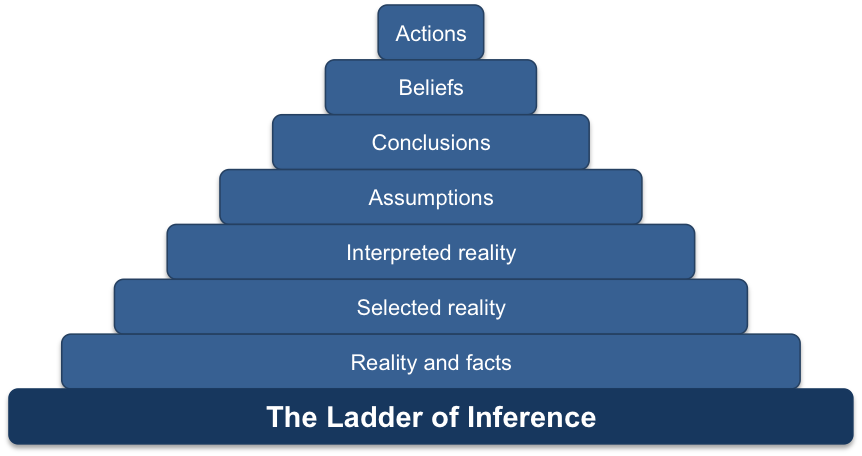 In this model, there are a total of seven ‘rungs’ on the ladder that is supposed to represent the common thought process that we go through while making decisions. Those rungs are as follows – listed from bottom to top – as they would be seen on the ladder.

When using this model in the real world it is easy to see how judgments can be warped as they move through the ‘selected reality’ and ‘assumptions’ stages.

When you allow your own personal beliefs to interfere with the choices you are making, you might lose track of the actual facts that are sitting right in front of you.

To get started using this decision making tool, the first thing to do is simply stop. Hold everyone in place so that the group can evaluate how it got to where they are in terms of their thinking, and how they can move forward properly. This is where to avoid jumping to conclusions.

Letting the decision making process run out of control thanks to personal beliefs and opinions, will result in choices being made that are not necessarily based in fact – or even in reality. To use the Ladder of Inference properly, the first step is to bring the group’s line of thinking to a halt whilst evaluating where they are and where they need to go.

Once the group has stopped letting their thinking run out of control, it can begin to figure out which ladder rung it is specifically on.

Accurately identifying the group’s position on the ladder is important, because the ultimate goal is to move it back down the ladder to the bottom, where it can deal in reality and facts.

Most likely, you will find that the group is somewhere up on the ladder above where you would like it to be – and below where you need to be in order to make a good decision. So, to reverse course, you are going to have to ask some difficult questions.

First, you need to figure out what it is that you are thinking about the decision at this point. Write down the exact thoughts the group are having at the moment on this topic, and then go about the process of picking apart those thoughts.

As you keep asking questions the group will be able to pick apart many of the lines of reasoning that have been used in the first place. 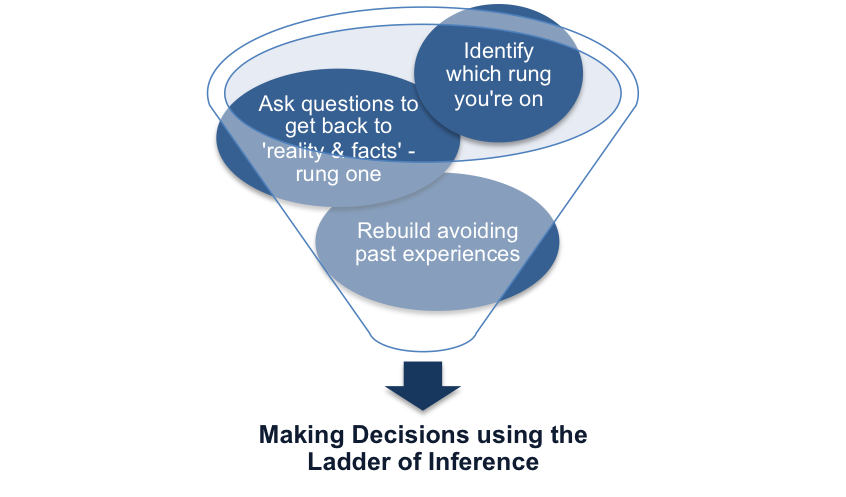 In many ways, using the Ladder of Inference is all about tearing apart current lines of thinking in order to build them back up again on a better foundation. It is only human nature to start to make decisions quickly when faced with a new problem – even if those decisions really aren’t based that deeply in facts.

So, by using this model, you can effectively look for holes in your group’s logic, only to plug those holes and then move back up the ladder again in a logical manner. You always want to be able to defend the group’s decisions in business, and using this tool will helps attain this objective.

Most likely, you only have the best intentions for the decisions that your team are making regarding the business. However, it can’t help but be influenced by personal opinions and past experiences – which may or may not be helping in making the right choice.

In the end, using a tool will help separate fact from fiction throughout the decision making process. Failing to make decisions that are based in reality, are likely to wind up with a poor decision in the end.

It is hard for some people to admit there was a fault in their thinking, but that is a crucial part of this process. Be honest and open with yourself, be willing to consider all evidence on hand, and look forward to making great decisions.