How to Overcome a Blame Culture at Work

One of the first lessons most people learn in childhood is how to take responsibility for their actions. Rather than blaming a misdeed on someone else, children are taught to accept the punishment for what they have done as part of living an honest life. While some children learn the lesson better than others, taking responsibility is a trait that all parents would like to have their children embody.

Unfortunately, many adults do not reflect the behavior they would like to see in their children. A ‘blame culture’ is common in all different kinds of offices, and can lead to a lack of productivity, wasted time, and hard feelings being created. There are many different reasons that can lead to the development of a blame culture, but all of them are reversible with the use of proper management techniques and some logical thinking. 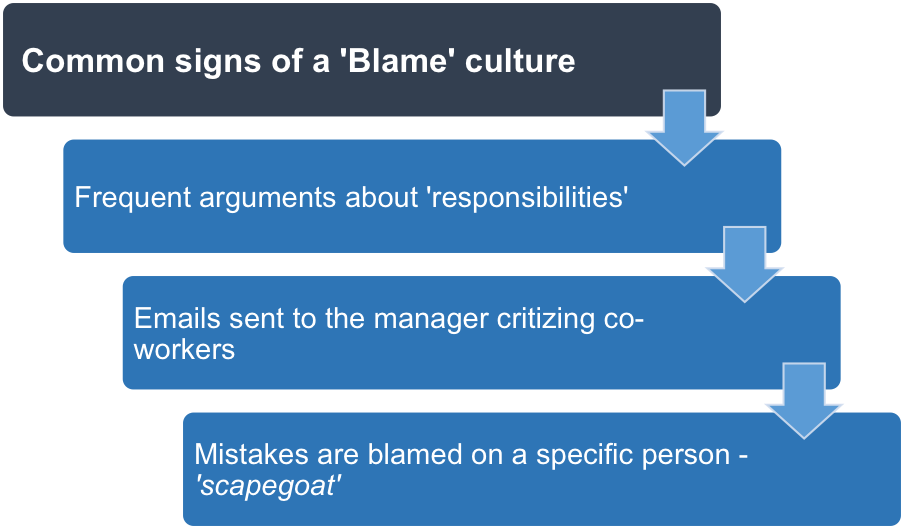 It is important for a successful manager to first be able to identify the existence of the blame culture in order to be able to eradicate it. Following are three common warning signs that a culture of blame is starting to develop within a professional setting.

With the situation identified, the manager needs to be able to effectively change the culture to one that promotes teamwork and unity rather than division. The first step down the road toward accountability is for the manager to take responsibility for the part they played in the situation. It is very healthy for the organization if the manager is willing to shoulder the load of blame or fault, even if it was in fact the error of someone else that is truly to blame.

When the leader is willing to accept blame, the remainder of the staff will see it as more acceptable to admit fault and quickly begin to do the same. To learn more about how to develop your leadership skills click on this link to download our free eBooks.

Another way to avoid or correct a blame culture at work is to encourage taking risks and thinking outside the box, making it clear that mistakes along the way will not be punished. A blame culture restricts creativity because employees are afraid to make mistakes and be criticized for them. By opening up the doors to thinking critically and helping employees relax by removing the fear of blame, the manager will be able to get the most out of the staff and access talents that they might not have demonstrated before.

As an alternative method of fixing the blame culture, a manager can try to cultivate employee relationships away from the office. Doing team building exercises such as a bowling night or attending a ballgame can help to make people friends that might not have been friends outside of the office before. When that happens, they will be less likely to blame each other because of the personal relationship they have developed. At that point, a manager will be more likely to see teamwork and trust than blame and finger pointing.

Quickly and effectively getting rid of a blame culture is one of the best things that a manager can do in order to keep a staff on track and productive. No one gains when the members of an organization are find fault in each other instead of working hard toward a common goal. It is the job of the manager to steer the ship in the right direction, and the above tips are a good start toward that end.