How motivated are your employees? If you are like the average business owner or manager, you might have a bit of trouble answering that question. Sure, we would all like to think that our employees are highly motivated, but is that really the case? Not necessarily.

Motivation can come and go within a team, and within each individual within that team. The best companies tend to be those which are able to keep their employees properly motivated as often as possible. So what can you do in order to make sure your employees have the drive they need to take your organization to new heights? According to McClelland’s Human Motivation Theory, one of the best things you can do is to understand each of your employees on a personal level.

Using McClelland’s Theory, you will attempt to identify what it is that motivates each member of your team, so you can give them what they need to keep striving for achievement. This is one of the tricky things about motivation – it varies from person to person.

You can’t assume that what is motivating or rewarding for one person will be the same for another, because those two individuals are likely different in just about every way. Understanding that motivation is not something which can be applied universally across the board is an important step in getting the most from your staff.

The heart of the Human Motivation Theory promoted by McClelland is the idea that there are three main motivators which come into play in the work environment.

While McClelland believes that all people have some degree of each of these three factors, one of them is going to be the dominating motivator for each individual. By determining which motivating factor is the dominant one for the people on your staff, you can then tailor your approach specifically to give them what they need. The three motivators are:

According to this theory, the main source of motivation for any individual can be found within one of those three categories.

In order to gain a better understanding of each, we will highlight all three briefly below.

The person who is motivated by sheer achievement is usually one who will relish in the opportunity to both set and accomplish goals. This is, in many ways, the ideal attitude for an employee to have. Motivated simply by the process of finishing their work in a manner that they are proud of, an achievement-motivated employee is unlikely to need much in the way of external motivation.

With that said, this type of person will usually appreciate the feedback and praise that comes with a job review. Although they usually thrive when working on an individual basis rather than as part of a team, this person can be an extremely valuable member of your organization.

In a lot of ways, this next person is the opposite of the person who is motivated by achievement. Rather than wanting to work alone in order to feel the sense of accomplishment that comes along with a job well done, the person motivated by affiliation wants to work as part of a group. They aren’t necessarily attracted to the idea of receiving praise and recognition for their work. Rather, they want to be ‘part of the club’, meaning they want to have a hand in the project and be accepted by the others in the group.

If your business is one that requires a high level of teamwork and cooperation across the staff, having employees that fit into this mold is going to be an advantage. When trying to facilitate teamwork, it can be hard to keep people happy who are motivated by individual achievement and success rather than the progress of the group. When someone is happy to just be affiliated and contribute their part to the greater good, the process of collaboration runs much more efficiently.

The title of this category says it all – this person is motivated by power. They want to control the others in the group, and they are motivated by the opportunity to do so. This is the kind of person who will thrive in, rather than run away from, a competitive environment.

If you have a number of people within your staff who fit into this profile, it may be best to let them ‘fight it out’, meaning allowing them to compete is going to bring out the best in them on a daily basis.

Unlike the person who just wants to be affiliated with success, this person wants to lead a successful team and be recognized for the effort. Status plays a big part of keeping this type of person motivated, so things like job titles are going to be effective motivators. Someone who is motivated by power can be perfect for certain roles within an organization, while being ill-suited for other tasks. Making sure that this type of person winds up in the right space for their mindset and attitude is important to their long-term productivity.

Human beings are endlessly complicated creatures, and their underlying motivations are just one of many complex layers that you need to understand as a manager or business owner. You might just assume that your staff is motivated by the paycheck that they get at the end of the week, or by the opportunity to ‘climb the ladder’ as time goes by. 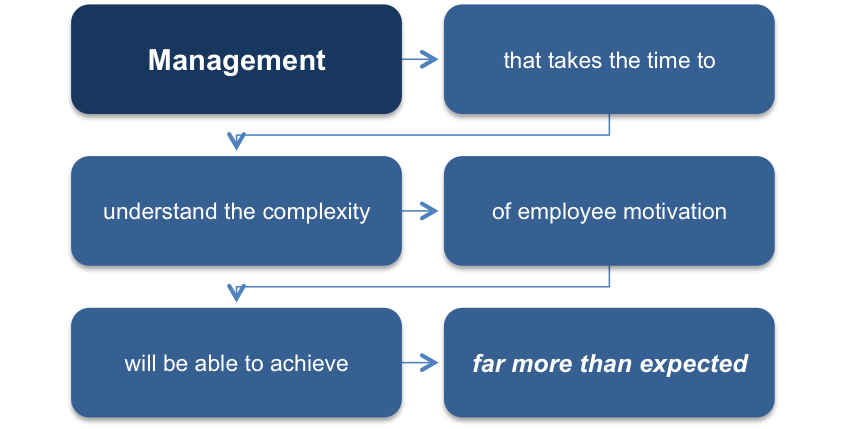 However, for many people, motivation isn’t quite that simple. Sure, they need the paycheck in order to pay the bills, but they also need to find motivation in other forms. Those who are only motivated by a paycheck and nothing else tend to do as little as possible in order to get by. Rather than allowing your staff to slide by on bare minimum effort, work to discover what it is that gives them motivation so you can feed into that motivation appropriately. Once motivated, your team may be capable of far more than you ever imagined.

You can read more about McClelland’s Human Motivation Theory in our free eBook ‘Top 5 Motivation Theories’. Download it now for your PC, Mac, laptop, tablet, Kindle, eBook reader or Smartphone.