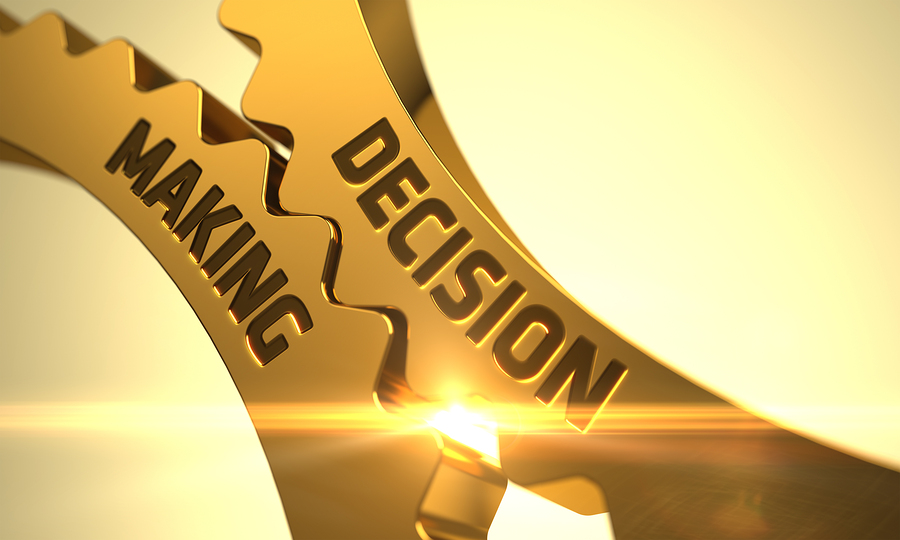 As you already know, it can be difficult – if not impossible – to come to a consensus when working with a team of individuals. Everyone in your group is going to have their own opinions on a given topic, and while there is bound to be some overlap in those opinions, there is going to be some disagreement as well.

As a manager or business owner, it is your job to sort through the disagreements and use all of the opinions at hand to come to a decision that is in the best interest of the organization.

To make it easier for you to figure out where the consensus of the group may lie, you might want to consider using Hartnett’s CODM Model. The CODM in the title of this model stands for ‘consensus-oriented decision making’, which should tell you all you need to know about the goal of this model and how it is designed to work.

This is a model that is designed to be used in group settings when a decision needs to be made that all can support.

Calling on a Group

Of course, you aren’t going to use group decision making for every problem that you face in your organization. For one thing, there wouldn’t be time to always use a group decision making model – you would be stuck in one meeting after the next with no end in sight. Also, it simply isn’t necessary to create a team to solve every small problem that comes up. Many of the day-to-day choices that need to be made can be handled by you as the manager or owner without any meaningful input from staff members.

However, there are going to be important decisions that come along which call for the formation of a team. These are the decisions that are going to impact your organization in a significant way going forward, and they are choices that you can take some time to make.

Before you begin you need to understand the concept of a decision rule. This is the level of agreement necessary to finalize a decision, for example: unanimous agreement, unanimous agreement minus X votes, super majority thresholds (percentage), simple majority, executive committee decides, or leader decides.

If you would like to use Hartnett’s CODM Model to solve such a problem, use the seven steps below to move through the model from start to finish. 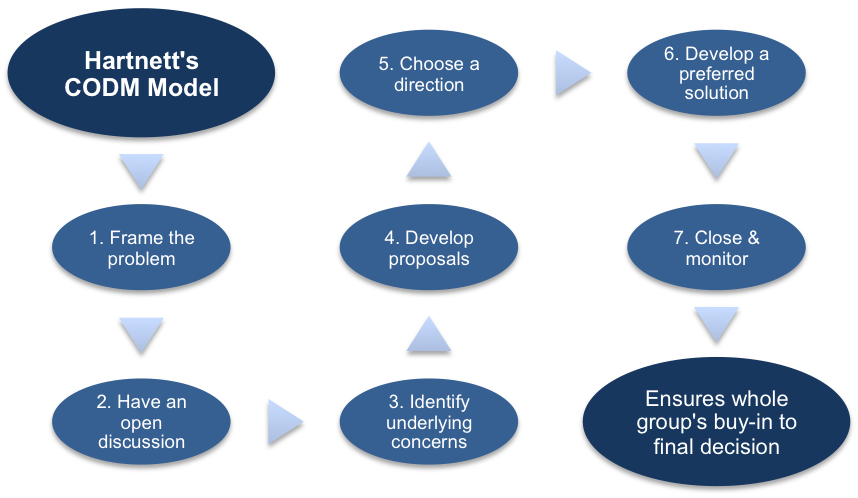 You can’t accurately solve a problem if you don’t know what the problem is in the first place. Make sure that everyone on the team is well-informed as to the specifics of the problem, why it is a problem, and what the ideal solution is going to accomplish. At this stage, you need to identify the problem, ensure that the right people, information, resources and stakeholders are involved and also to set the decision rule.

Having an Open Discussion

Once all involved are clear on what the problem is, the next step is to have an open and casual discussion about that problem. At this point, there aren’t going to be any grand plans established, and there certainly won’t’ be any decisions made on how to move forward. Think of this stage as laying the ‘groundwork’ for future discussions and meetings which will come to more concrete solutions.

One of the benefits of your initial meeting is the fact that you are likely to uncover ‘hidden’ problems that weren’t really considered initially. As your team discusses the main problem at hand, it may be that other issues pop up along the way. It is at this point that you should highlight those underlying concerns, and figure out what measures can be taken to mitigate their significance.

By the time you have reached this fourth step, things are going to begin to get more organized. You will now put together some formal proposals on a solution for the problem at hand.

You can either work together with the entire team to develop a few different proposals, or you can choose to break the team up into groups in order to have each craft their own proposal. The latter option can be attractive when you have a ‘divided room’ – in other words, a meeting that is split into two or three different groups who view the issue in different ways.

With the proposals created and on the table, it will be time to sort through them in order to make a decision. It is important to remember that you don’t necessarily have to pick one specific proposal in order to move forward – it may be that the best option for your needs is to use a combination of ideas from two or more proposals. 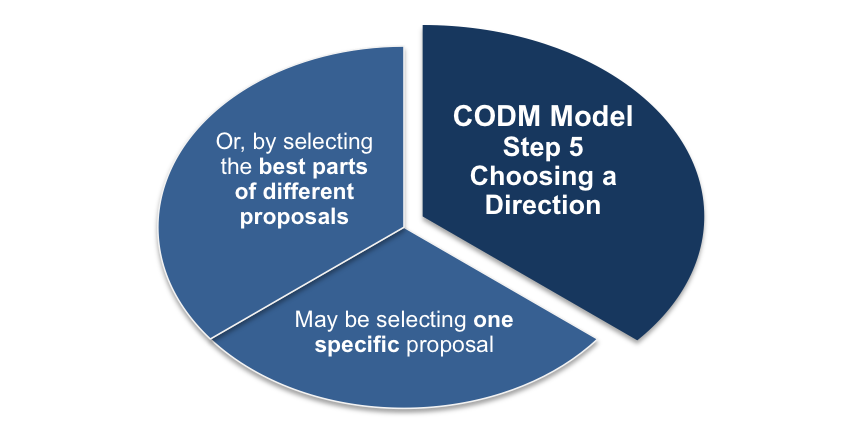 The time has come to make the final decision and to put that decision into action. There will have been no point to going through this process is the final decision isn’t going to be enacted, so make sure there are steps which will ‘get the ball rolling’ on the decision as soon as it is approved and finalized.

As you know, there is no such thing as a decision in business that you can just forget about and move on from. You should be monitoring the decision after it is made to make sure that it has had the desired effect. Most likely, you will need to tweak minor things about the decision in order to make sure it is as successful as possible over the short and long term.

It is likely that your team will appreciate using this decision making model as they will have a chance to make sure their voice is heard along the way. Even if you don’t have a true consensus in terms of everyone on the team totally agreeing with the final decision, at least you will have given everyone involved a chance to provide their input. It is important to the health of your organization to make sure that no one feels marginalized in terms of their role in the business, and using things like the CODM Model are great for just such concerns. You may not have to use group decision making on a frequent basis within your organization, but when the time does come to form a team in order to make an important choice, you can turn to the CODM Model for assistance.

You can read more about Hartnett’s CODM Model in our free eBook ‘Effective Group Decision Making’. Download it now for your PC, Mac, laptop, tablet, Kindle, eBook reader or Smartphone.